A brief history of shaving 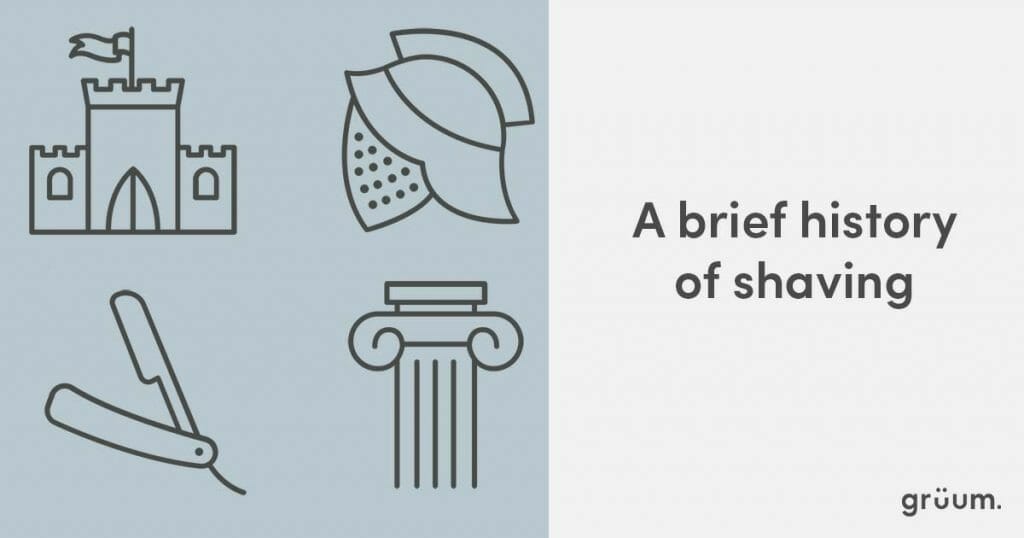 Shaving as a concept has been knocking about for thousands of years, though over time it has veered away from torturous, to the more luxurious end of the spectrum. Back in the day, like really far back, like, pre-multi blade safety razors and shaving gel (I know it’s hard to imagine) men used to use two pieces of shell to pluck their hair out. We know this because of cave paintings that date back to 100,000 years ago. Nice one artists of the past.

This wasn’t a matter of vanity (though I’m sure they looked notably fresh afterwards – if a little red-faced) it was actually a means of survival. These lucky folks were in fact, right in the middle of an Ice Age. If their beards got wet, they would be vulnerable to frostbite, and so they had to rid themselves of their face warmers, ironically so they didn’t freeze their faces off.

It took a not so casual 60,000 years for things to progress to the next level. To be fair, they probably did have a lot going on, what with mammoths and never-ending freezing land around them. The man of yesterday may have had other things on his mind than developing a smoother shaving experience. Anyway, 60,000 years later, the old-school lads had a breakthrough and started using shards of volcanic glass, sharpened clam shells and some other miscellaneous sharpened tools to scrape away those unwanted hairs.

Skip ahead another few thousand years to around 3000 BC and you’d be lucky enough to be about for the invention of the copper razor, which popped up alongside many other copper tools when, shockingly enough, copper was discovered. What had originally begun as a quite painful process just to prevent death, had now morphed into something much more related to aesthetics and culture.

One of the more notable cultures in the world of shaving were the Ancient Egyptians. Early on in their culture, the Egyptians coveted their facial hair, often plaiting it and sprinkling it with gold dust. The beard had a divine and powerful quality about it and men took great pride in their facial hair. As the transition into the Dynastic period took hold though, hair began to be associated with primal, animalistic instincts – things that were seen as barbaric and lower class. Soon it became common, if not expected, to remove as much of your body hair as was humanly possible.

It wasn’t just the raw hairiness that put people off though, this obsession was partly due to the roasting heat, as well as personal hygiene. We all know from our school days that hair is a very convenient way for parasites and disease to get around. So with only the very basics of medicine at their fingertips, methods of prevention like hair removal became common practice. Things escalated and soon men, women and children across Egypt were all jumping on the bandwagon – everything above AND below the neck was to be removed.

After a while, this became not just a matter of personal hygiene but also a symbol of status. If you had hair, you were considered barbaric or of a much lower class. Rich men and women of high status often employed barbers to take up residency in their own homes so they could have their hair cut whenever they wanted.

Great time to be a barber.

The once-treasured gold dusted beard was now replaced by the smoothest skin possible. However, the divine power of the beard was not forgotten. Dynastic kings often wore a fake goatee made of silver or gold at ceremonial events (ballin’) and are often depicted with these beards attached in Hieroglyphics. After death, Kings would be placed in their tombs alongside precious items, which often included a razor encrusted with precious stones.

The Ancient Greeks went down a slightly different road than the Ancient Egyptians. They stuck with the divine nature of the beard idea instead and facial hair became a very important part of ritual and cultural tradition. When you were a wee lad, you weren’t allowed to cut the hair on your head until your beard had grown in, and when that first beard did make an appearance, it was to be dedicated to the sun god Apollo in a religious ritual.

Beards became very precious to a point where men would only cut their beards off at a time of mourning. In fact, if a razor wasn’t close to hand during a moment of extreme grief over a loved one, some particularly mournful Greek men would resort to ripping their beards from their faces. Hardcore stuff. On the flipside, to have half of your beard shaved off was a shameful sign of cowardice – a mark that you had chickened out in battle.

However, all of this changed when Alexander the Great sauntered onto the scene. His biggest priority was winning battles (apparently he was pretty… great at it… ha.) and one of his main classic Alexander lightbulb moments was to tell everybody to shave off their beards so that their enemies had nothing to hold on to. And everybody did. After this bold move, face hair just sort of faded into the background.

The Romans had a pretty similar deal to Alexander the Great when it came to shaving, though they also had some rituals when it came to facial hair. Young boys were not allowed to shave their fuzz away until they reached the age of maturity and then when they reached that age, they had to shave it off in front of friends and family. Pretty high-pressure situation for your first shave.

This initial shave would be the first of many, as the Ancient Romans went clean shaven at all times with pride. They even went as far as to rub any excess hair away with pumice stones, and then rub in massage oils and perfumes afterwards. Sounds quite familiar.

Roman women also partook in the removal of their body hair, as, just like the Egyptians, they associated hair with being barbaric or ‘uncivilised’. In fact, it was only really European women who did not partake in this act, or at least, it was not discussed.

The Egyptians and people like Alexander the Great were seen as pretty cool folk, with their pointy buildings, clever people and battle-winning skills. So the upper classes of Europe were inspired by them and began partaking in facial hair care, with the majority of the esteemed crowd depicted in portraits sporting a clean shave, a crafted moustache or a carefully trimmed beard. It was becoming a social necessity to shave.

Everything was going swell, right up until the fall of the Roman empire. After that, everything went into decline for a while. Between 500 AD and 1500 AD, roads were decaying, agriculture was in depletion and…. people weren’t shaving as much. Shocking stuff. However, though it declined socially, shaving did become popular for another reason. This was a very pious, religious time and shaving was often incorporated into religious practices. It became common practice for Christians to shave off any facial hair, as well as the hair on their crowns (the perfect era in which to be going bald on the quiet). Aside from this, people seemed to mainly be focusing on surviving through a time of deep European confusion.

After the Renaissance, things started to pick up a bit. People got back into the whole shaving culture thing and Queen Elizabeth became a fashion icon. Despite everything below the neck apparently being au naturale, Liz was known to tweeze her eyebrows regularly. This was to promote an elongated brow. Women across Europe began tweezing their eyebrows and even using homemade hair removal concoctions (often disturbingly involving ammonia-rich cat faeces) to remove any unwanted hair on their forehead to get the Queen Elizabeth Look.

Hot take – perhaps women in western Europe weren’t so keen on hair removal as they wore excessive amounts of clothing regularly? What’s the point in shaving your legs, if you’re wearing 3 layers at the beach?

The Birth of The Middle Class

By 1700 AD a group of people were forming that were not quite disgustingly rich, but could afford the little luxuries in life. A more relatable sort of man started going to the barbers regularly, and it settled in as common practice for a civilized man to be clean shaven.

The Rise of the Razors

No, this isn’t a film by Alfred Hitchcock – it’s the era when things started to look more like today. The straight razor developed a bit more but mostly still remained in the well-trained hands of barbers, but in the late 1700’s a french guy named Jean-Jacques Perret invented the first razor resembling the modern razor – he essentially put a wooden guard over the previously exposed blade. Simple but effective – nice one Perret.

This was developed over the years by a few other people, such as the Kampfe Brothers and finally fell into the hands of King Camp Gillette, an inventor and travelling salesman whose name is now known worldwide. In 1901 him and his pal William Nickerson had a look at the safety razor and miraculously came up with the disposable razor. This took the world by storm, partly due to an excellent marketing strategy you can still see being used today. In 1960 the cartridge razor was invented until finally, people began finding razors with up to 6 blades in them.

Shaving began being marketed towards European women in 1915, by Gillette. Their marketing strategies were a little insulting, to say the least. They took advantage of various insecurities and the desire to ‘keep up with the Joneses’ that flooded through society. Either way, it became very much common practice for women to shave, regardless of how questionable their motivations were.

Now, thankfully things are getting a bit more equal. We’re not as extreme as the Egyptians, but we do like a smooth life. Women and men shave or don’t shave as they see fit, now with extremely comfortable razors that have little strips of moisturizing joy on them. You can even use a moisturising shave gel to protect your bod that will make you smell lovely afterwards.

Oh if the cave people could see us now.

(And with no fear of frostbite or parasites, a man can sport a beard and be extremely well-respected by society.

Thank you science, thank you so much.)